John Wayne famously said “Life is hard. It’s harder if you’re stupid.” I have certainly done my share of stupid things, and I suspect you have too. 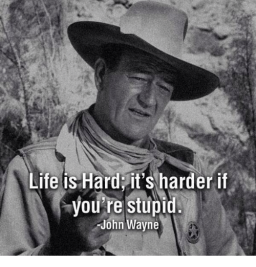 In our defense, none of us is born smart, but the truth is, we are all responsible to learn the things we need to know to succeed in life. The passing of years is all it takes for us to grow up physically. But we need to proactively apply ourselves in order to mature emotionally, relationally and spiritually. Charley “Tremendous” Jones said, “You will be the same person in five years as you are today, except for the people you meet and the books you read.” 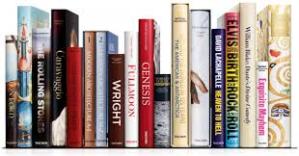 So, let me introduce you to someone you really need to meet, and the book he wrote; The person is King Solomon; the book is Proverbs.  The smartest man in the world gave this advice: Get some wisdom. Prov 4:5.

He wasn’t just trying to sell his book. He was trying to teach his children to learn from his mistakes, instead of experiencing the heartache of learning painful lessons, firsthand.

He tells us to treasure our spouse and be faithful to them. Not to get drawn away by the lies or the counterfeits of the enemy.

Here’s a cool thing. There are 31 chapters of Proverbs and 31 days in most months. Perfectly laid out to read one chapter a day; bite size pieces of everyday wisdom. I read through Proverbs at least twice a year, and I’m always learning something new. You can never exhaust the wisdom of God.

Happy is the man who finds wisdom, And the man who gains understanding, for her proceeds are better than the profits of silver, and her gain than fine gold.
Her ways are ways of pleasantness, and all her paths are peace. Prov 3:13,14,17

The fear of the Lord is the beginning of wisdom, and the knowledge of the Holy One is understanding. Prov 9:10-11

The fear of the Lord leads to life, and he who has it will abide in satisfaction. Prov 19:23

Ah yes, satisfaction. I like that word. I want “Satisfaction” to be the word I always use to describe my marriage, and I’m sure you do too. Let’s get some wisdom.

Whether you rooted for the Rams or the Patriots, these lessons will guarantee a win! 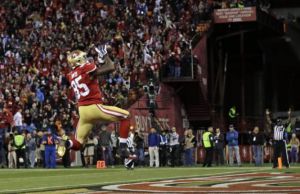 If you know a little bit about football, you can learn a few lessons about having a winning season in your marriage. Here are a few things I’ve learned:
1. Make a plan and practice, practice, practice.
2. Pray before you set foot on the field.
3. The clock is ticking and time is limited. Use it wisely.
4. The opposition is over there. You don’t tackle your own team mate.
5. Huddle. Put your arms around each other. Use mouthwash.
6. Everybody fumbles once in a while.
7. God is your head coach. He calls the plays. Trust him.
8. Don’t be offensive.
9. Don’t get defensive.
10. Always use your mouth guard. It is mandatory.
11. Unnecessary roughness will get you a penalty.
12. Keep your end in view.
13. Kiss the arm…the shoulder…the neck… the lips.

The alarm goes off at 4:45 A.M. but we’re usually not ready to leap out of bed. Then after a snooze or two manage to get to our feet. I click on the coffee pot, and we stumble around…brushing teeth…“How did you sleep?”… giving the fish a pinch of breakfast…

Then, coffee in hand, John and I have about an hour and a half of what we call QT – quiet time. In separate rooms we each center ourselves and plan our day. We read our bibles and other edifying things. We pray and think (and sometimes snooze).

But for the last few months John’s QT has been sidetracked by the force of “Physical Therapy”. He still spends some time in his chair and in his bible, but a solid hour of his precious QT has been gobbled up by an exercise regimen. Groan.  Razzle frazzle….

About five months ago John hurt his back, and we were sure he was headed for back surgery again. We spent our 31st anniversary sitting in our grandpa and grandma chairs, wondering if this was how we would spend our so-called golden years.

When we got married we vowed “…for better for worse, for richer for poorer, in sickness and in health, to love and to cherish, till death us do part…” So the rocking chairs would not be a bad option.

We would be content to be together, but we don’t want to see each other hurting, and neither of us would choose to burden the other with the life of a caretaker.

The doctor said surgery was certainly an option, but he suggested that John first try physical therapy. To be honest, I was a little irritated. I wanted a more immediate fix.

So cane in hand, John limped off to talk to the physical therapist. The exercises seemed like nothing. Nothing! A waste of time. John admitted that he really didn’t feel like anything was happening when he did them. There was no pain (from the exercises) so how could there be any gain? How could a few little squats and stretches mend a broken back?

Every day, to some extent, John lamented the loss of those lost morning minutes he used to spend in his chair, in his bible. But then we began to notice that the insignificant  little stretches and crunches were doing their job. Muscle tone and strength began to return.

John is almost “back on his game” now. He is again able to play tennis every Friday afternoon with his longtime tennis buddies. He is walking without a limp and without a cane. 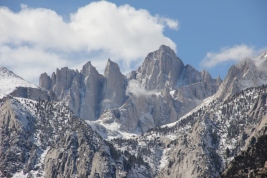 He is still a way from where he was 6 months ago, but we are both hopeful that we might still climb Mount Whitney again, instead of being relegated to our rocking chairs.

I am so thankful that my husband opted for something higher. Even though the exercise didn’t seem to be doing anything, he was faithful. He kept his eyes on what was unseen but promised.

Faithfulness, even when there were no immediate visible results.

This all has reminded me to take care of myself for John’s sake as well as my own. We are one. It goes for both of us and as John said in a previous blog post, “The secret to success is encouraging one another as we face these changes together.”

Many people see their life like a TV dinner. You have your main course – your relationship with God. Then this compartment is your marriage, that one is your job, and another is recreation, etc… But we think life is more like a potpie.
It has all the essential ingredients, but not it’s nearly as orderly. A potpie has your meat, your veggies, some wonderful gravy, and I love the crust that keeps it all together. Yummm! And make sure you leave room for dessert. My wife, Andee writes a blog called PaladiniPotPie. It is an assortment of family traditions, God stories, and practical observations. She also throws in some recipes and family lore that have kept life in the Paladini family interesting, challenging and sometimes downright wacky! We want to share them with you. Check out http://paladinipotpie.com/. You’ll love it!

John Paladini is a husband, pastor and author. He has been happily married to Andrena for 29 years. They have three adult children, four grandchildren....and counting. John has devoted hundreds of hours to marriage counseling, conferences and bible studies that strengthen marriages.